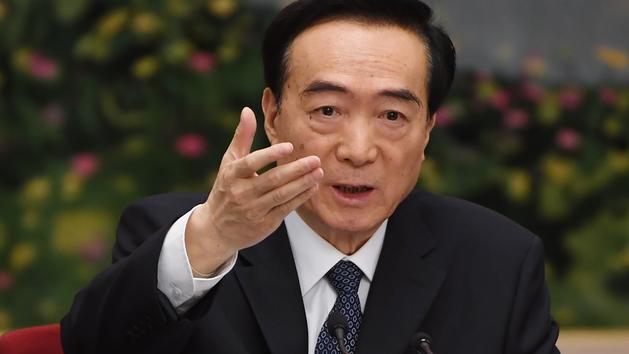 Genocide, that’s what China is committing against the Uyghurs in Xinjiang. More than a million people are locked up in concentration camps, torture and sterilization of women is a daily occurrence. Eradication of this minority is the goal. This chilling fact has now been recognized by the governments of the US and Canada and also recently by the Dutch Parliament.

But who and how are the perpetrators? There is one man who stands out as the prime suspect, as a possible Chinese Himmler or Heydrich.
Chen Quanguo, 66, became Chinese Communist Party Committee Secretary in Xinjiang in August 2016. A rough and mountainous area in the west, which is twice the size of Germany and has 11 million inhabitants.
It was no coincidence that it was Chen – that is his surname – who was called to break the resistance of the Uyghurs.
Chen had experience. He had done the same for the previous five years in Tibet. He had made Tibet a unique police state. In which the Tibetan residents were deprived of all human rights, forced to spy on each other and live in a sophisticated maze of barriers and police stations, full of monitors and eavesdropping equipment. Computers that register every unwanted deviation. Tibetans were deprived of freedom of movement in their own area. Insofar as not yet demolished, the monasteries were placed under the leadership of loyal Han Chinese and Tibetans had to fly the Chinese flag from their houses and hang a portrait of Mao or Hsi Jinping above the chimney in their living rooms.
After Chen had led this system for a few years, the world didn’t hear much about Tibet anymore. Now it was clear. Chen Quanguo was the man designated to carry out the proposed treatment of the Uyghurs.

Discrete
He looks like any Chinese leader. The hair parted on the left, the dark blue suit, the serious expression. He is difficult to distinguish from colleagues, but then through his words?
Even his statements don’t make a researcher take immediate notice either; he seems to take care of that.
At a well-attended press conference of the Chinese authorities of Xinjiang, he allowed Governor Shohrat Zakir, a rank below him, to speak. That was November 26, 2019 in Beijing. When one of the journalists asked about the detention camps, he whispered something to Shohrat, who replied that these prison camps were “boarding schools”. He did not answer a single question himself. However, he ended the meeting politely and in a timely manner with “I would like to express my sincere gratitude to the Chinese and foreign journalists for their interest in Xinjiang”. [1]

Like all Chinese leaders, Chen also denies that there are concentration camps for the Uyghurs and other minorities, such as Kyrgyz, Kazakhs, Mongols or Christians. They describe these centers as “vocational training” where they learn Mandarin and are kept away from “religious extremism”.  Chen discloses himself more in revealing secret documents leaked by an unknown Chinese whistleblower in 2019. He says these camps should “be like schools, be run by the military, and defended like a prison.” It also states that Chen urges his colleagues to “get rid of anyone who needs to be gotten rid of”. [2]

In this way, he makes sure to follow in the footsteps of great leader Hsi Jinping who, after a Uyghur attack in 2014, called to show “absolutely no mercy”.
Chen expresses himself in a clearly more veiled manner than his right-hand man, Zhu Hailun. When Chen built concentration camps in the Uyghur capital of Urumqi in January 2017, Zhu unabashedly shouted to heavily armed military forces: “We must load our guns, pull our swords out of their sheaths, strike hard against the terrorists, and not shrink from striking mercilessly.”, according to The Guardian in those days. I have scoured the Internet but can only confirm the impression of the Hong Kong-published South China Morning Post that Chen is not a man of jokes or personal anecdotes in his speeches.[3] Chen is different; he is a man of action.

In Tibet
As soon as he was in office in Tibet, he brought in new police officers and divided the capital Lhasa into small pieces, each of which was given a police station 15 meters apart so that the control over these offices could be reciprocal. In 2016 there were already 156 of these offices in the still modest city. The police guards patrolled every hour to provide seamless surveillance. In the rest of the country, there were already 544 police stations in 2016.[4] In Tibet, 81,140 households, in total 3 million people, are linked together to monitor each other in all areas of life and to report on each other to the police. That’s how it was last year.[5] He calls this system the “dual-connected household management system”, which he later transferred to Xinjiang.
Since Chen ruled Tibet, the country has been overrun with new ventures, all of which received Mandarin-speaking Han Chinese for leadership positions. However, that growth only really benefited the Han Chinese and their Tibetan accomplices.
Since Chen took office in Tibet, there has been a steep increase in self-immolations by Tibetan monks, nuns, and civilians. It is estimated that a few hundred people have attempted in this way to make known to the world their despair and opposition to Chen’s methods.[1] Chen had the police beat, shoot, and isolate or make disappear the surviving victims of such suicide protests. Their families have been arrested or detained, sparking new forms of protest. International Campaign for Tibet has reported all this.

Thousands of monks and nuns were taken from Buddhist monasteries, their homes destroyed, and sent by buses to re-education camps. These re-education camps sprang up like mushrooms during Chen’s reign, according to reports in Tibetan Review, Radio France Internationale, and Human Rights Watch. A video showed nuns being forced to sing and dance Chinese songs on a stage. Back to the monasteries was not an option for them, but forced labor was.[2]
Chen described his policy as a “Campaign to Maintain Stability.” A 2014 report from Human Rights Watch included a quote in which he expresses his satisfaction with his work in Tibet. In impenetrable words: “We have followed the law by striking and mercilessly pounding against illegal organizations and key figures who follow the 14th Dalai Lama’s cabal and carry out separatist infiltration and sabotage activities by beating down the hidden dangers and the breeding ground for the undermining of the stability of Tibet and effectively securing the highest interests of the state and the general interests of society.” *8

To Xinjiang
Beijing was happy with Chen. Great leader Hsi Jinping now maneuvered his favorite Chen to Xinjiang to replay his game there. He left Tibet, whose nomadic character had been destroyed and where torture had become a daily practice. A recommendation for Chen. He was the first Chinese party boss to become the party secretary, the top man, of both Tibet and Xinjiang.
He left his previous prey to now subdue Xinjiang. Again, Chen immediately ordered a massive police force and hired “police assistants” as well as “security guards”. Immediately, 30,000 police officers and a police station appeared on every street in every city. In the area, 7,300 checkpoints were built. Again, monitors everywhere. Again, everywhere mobile phones, control over every person.
He expanded the existing concentration camps on a large scale. He introduced preventive internment and re-educated the majority of the minorities.
Passports of Uyghurs and others were confiscated, and free travel, including domestically, was over. Hundreds of Uyghurs were simultaneously hired out, police guards and all, to firms in the heartland of China. They are called “students”, regardless of their age, because elderly people are also unceremoniously put on the train as parcels. Ordered via the internet. As he did in Tibet, Chen promoted a strong influx of Han Chinese to Xinjiang in order to reduce the predominance of the Uyghurs in the population. In the camps, the Uyghurs often had their hair cut off for trade in the world as wigs and hairpieces. A US Customs discovery of such hair contributed to the US genocide investigation, which appears to have hurt Chen.
Chen conducts all of his work with great personal energy. On days off, he sits behind his desk and also summons colleagues. “Whatever he does, he does with extreme and unparalleled speed, urgency, resources, and foresight,” said Adrian Zenz, one of the first to expose the terror in Xinjiang.*9

Chen himself has flowery words for the work he does. “We are leading people of all ethnic groups to love unity as much as their own eyes, to cherish unity as much as their own lives, and to be close to each other like the seeds of a pomegranate”, reports The Guardian.
According to reports from above in China, Chen’s regime has “destroyed 1,588 terrorist groups” and arrested “thousands of ‘terrorists’”*10 That was a few years ago, the numbers have undoubtedly increased since then.

International Criminal Court
Does the comparison of Chen with Nazis like Himmler or Heydrich hold? The organizers of the most famous genocide?
The torturer of Tibet and Xinjiang is a more anonymous type, who is not coincidentally much less known in the world. Much less than known than, for example, Carrie Lam, who is the head of Hong Kong. Chen deliberately takes a discreet position, in a remarkable contrast to his prominent role. This appears to be part of the system of keeping personal data about political officials in China out of the public’s eye. He has a wife, yes, but that’s it. Do they live together? Children? Where? All-powerful, but privately he’s a ghost. Also, his actions are veiled. That this is about genocide is carefully concealed, just as the Nazis did.
However, there is a difference between the genocide against the Jews and that against the Chinese minorities. The first was paired with massive, concentrated killings, the second, as far as is known, not. In Xinjiang and Tibet, it is systematic and violent human rights abuse, accompanied by camouflaged and scattered murders. The effect is forced ethnic evaporation and cultural genocide.
When the Americans began to study the events in Xinjiang and were the first country to determine the genocide, they stumbled upon Chen Quanguo despite his almost anonymous figure. In July 2020, the US imposed sanctions first against him, as well as his right-hand man Zhu Hailun and two subordinates. They are no longer allowed in the US and their assets there have been frozen, much to the great anger of China.Now also the EU bravely imposed sanctions against China, against 4 functionaries in Xinjiang, but strangely enough not against Chen Quanguo, the first responsible figure.

There is another difference from the infamous heads of the SS. If the world doesn’t act quickly, Chen Quanguo will have much more time to finish his job. Before he appears where he belongs: before the International Criminal Court in The Hague. But that will not happen for the time being, China does not recognize this court. What the EU now did follow the US  in  taking sanctions against four Chinese officials in Xinjiang and one state company, but  strangely enough not against Chen Quanguo. This omission should be of course repaired and he should join immediately this list of sanctionized Chinese functionaries.

*8 Resistance in Tibet: Self-immolation and Protest. International Tibet Network, 03 May 2013.

(Translated from the Dutch by Pamela Docters)