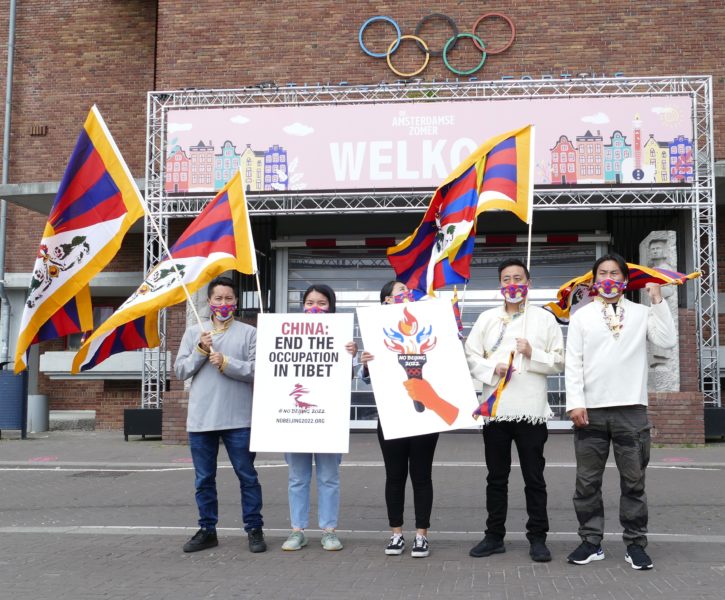 We are a coalition of over 250 global campaign groups representing Tibetans, Uyghurs, Hongkongers, Chinese, Southern Mongolians, Taiwanese, and other affected and concerned communities. Ahead of the European Council Summit, we urge EU leaders to take strong
multilateral action by committing to a diplomatic boycott of the 2022 Beijing Winter Olympics.

On 9 December an independent tribunal (1) found China was carrying out “a deliberate, systematic and concerted policy” to bring about “long-term reduction of Uyghur and other Turkic people “, and such constituted genocide and crimes against humanity under the 1948 Genocide
Convention. (2)

For EU leaders or diplomats to attend the Beijing 2022 Winter Games in the knowledge that the host state is enacting a genocide would be an act of complicity and an enabling of China’s plan to ‘sport wash’ (3) their human rights abuses. Further to the active genocide against the Uyghur people, new evidence released this week shows that close to 1-million Tibetan children are being housed by Chinese authorities in colonial boarding schools, cut off from their parents, families, culture, and religion, and faced with intense political indoctrination. (4)
In Hong Kong, three more democracy activists have been found  ‘guilty’ for taking part in a vigil to mark the 1989 Tiananmen Square Massacre. They now face sentences of up to five years in jail simply for taking part in a peaceful protest.
There is no prospect of the Beijing 2022 Winter Games playing a positive role for human rights or encouraging the Chinese government to halt the above human rights violations.
As the 2008 Beijing Summer Olympics showed, the Chinese government will instead interpret the lack of action by governments and the presence of leaders and dignitaries at the opening and closing ceremonies as a message that it risks no serious consequences for its actions.
Governments must now prove that there is the political will to stand up against China’s despicable human rights abuses and crimes against humanity. In this last week we have seen the US, the UK, Canada, and Australia all make commitments to boycott Beijing 2022, and it is now time for every government around to stand on the right side of history. The Chinese government is aware that the EU is in a uniquely powerful position due to its ability to act as a bloc to stand for human rights. A joint boycott by EU countries has the potential to be the strongest statement yet by governments who care about defending human rights.

We, therefore, call on EU leaders to urgently commit to a joint multilateral diplomatic boycott of Beijing 2022.

and the following organisations:

4 China’s Vast System of Colonial Boarding Schools in Tibet’ gives evidence to Chinese government policies are forcing three out of four Tibetan students into a vast network of colonial boarding schools, separating 800,000-900,000 children aged 6-18 from their families and communities. This number does not include an additional, unknown number of four- and five-year olds. The schools are a cornerstone of Xi Jinping’s campaign to eliminate Tibetan identity and supplant it with a Chinese nationalist identity in order to neutralize any resistance to Chinese Communist Party (CCP) rule. https://tibetaction.net/campaigns/colonialboardingschools/
3 “Sports washing” is the practice of an individual, group, corporation, or nation-state using sport to improve its reputation, through hosting a sporting event, the purchase or sponsorship of sporting teams, or by participation in the sport itself. At the nation-state level, sportswashing has been used to direct attention away from a poor human rights record. While at the individual or Corporate level sportswashing is used to cover up and direct away attention from said person’s or company’s
vices, crimes, or scandals.” https://en.wikipedia.org/wiki/Sportswashing
2 Uyghur Tribunal’s judgment – https://uyghurtribunal.com/wp-content/uploads/2021/12/Uyghur-Tribunal-Summary-Judgment-9th-Dec-21.pdf
1 The Uyghur Tribunal is an independent people’s tribunal set up to investigate ‘ongoing atrocities and possible Genocide’ against the Uyghurs, Kazakhs and other Turkic Muslim Populations. The Chair of the Tribunal is Sir Geoffrey Nice, a barrister former judge in England who previously led the prosecution of Slobodan Milošević at the UN’s International Criminal Tribunal for the former Yugoslavia. https://uyghurtribunal.com/who-we-are/